A post that depicts a lavish lifestyle will be interpreted by DSSRC as an earnings claim (particularly, as here, when combined with an express statement of significant earnings) for purposes of a self-regulatory review.

The Direct Selling Self-Regulatory Council (DSSRC), a division of BBB National Programs, has released new guidance on earnings claims. This new guidance defines and classifies earnings claims and is provided to help ensure direct selling companies and their independent distributors are making representations that comply with legal and self-regulatory standards.

While the guidance sets forth general principles regarding earnings claims and is not specific to the current health crisis, it is important to note that the Federal Trade Commission (FTC) has stated that it has seen questionable earnings claims since the COVID-19 pandemic drove millions of independent distributors online. This makes what was one of the channel’s greatest challenges—ensuring that all representations by companies and distributors adhere to legal and self-regulatory standards—even tougher.

Offering contact-free product ordering and what can be a completely home-based business opportunity, direct selling is in a unique position to attract new customers and representatives in an economic climate in which more than 50 million Americans have filed new unemployment claims in the past four months alone.

This kind of potential for growth, however, requires responsibility according to the BBB. “During these dynamic times, it is of paramount importance that we maintain the integrity of the direct selling space and be especially cognizant of any and all product claims and business opportunity representations,” said Eric Reicin, president and CEO, BBB National Programs, in an April press release.

“As integral members of their neighborhoods, direct sellers have a unique opportunity and responsibility to share accurate information about their products and opportunities,” said Joseph Mariano, DSA president, in the same release. “We can and will be an important part of the restoration of our communities and our country by providing needed products, services and information.”

This guidance helps companies and distributors better understand such details as what qualifies as a misleading earnings claim; a company’s responsibility for claims made by the field; best practices to avoid self-regulatory challenges; and examples of the most common misleading earnings claims referred to regulatory agencies for corrective action. 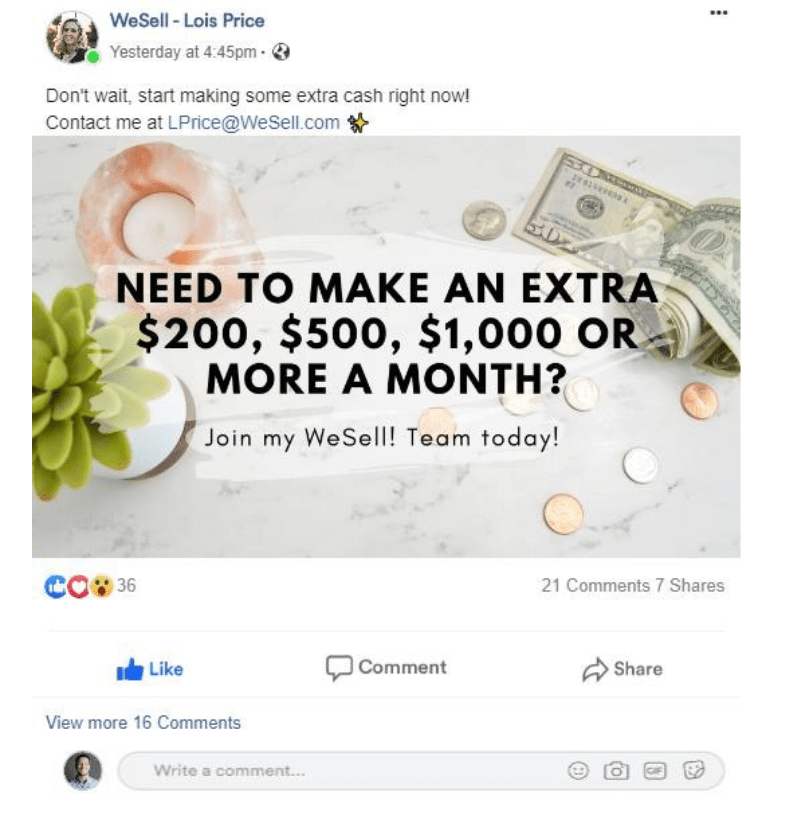 The above post illustrates a range of potential earnings. DSSRC would expect the direct selling company to possess evidence showing that the maximum amount that is referenced in the post is income that could be generally expected by a salesforce member.

Definition of an Earnings Claim

DSSRC defines an earnings claim as any claim, express or implied, that conveys:

A level or range of actual or potential earnings that may be earned by distributors;

A level or range of gross or net income or profits, including but not limited to representations that suggest that the ability to make lifestyle purchases (homes, cars, travel, etc.) are achievable with income earned through direct selling;

Any statement, representation, or hypothetical scenario from which a current or potential representative could reasonably infer that he or she will earn a certain level or range of income;

Any chart, table, or calculation demonstrating possible income, actual or potential sales or gross or net profits based on a combination of variables;

Marketing or advertising, describing or promising potential income amounts or suggesting extraordinary lifestyles of distributors thanks to their participation in direct sales;

Marketing or advertising, describing or promising potential income amounts or demonstrating lavish lifestyles of distributors thanks to their participation in direct sales;

That distributors may earn or have earned company-sponsored incentives, including the above-mentioned homes/cars/travel or other rewards.

Earnings claims should factor the mandatory costs associated with running a direct selling business—namely, the products that representatives purchase for resale. Additional expenses may include registration, travel and accommodations for company events and should be considered on a case by case basis.

Advertising includes both the material shared by the company itself and its distributors, including any claims made on social media. Because companies are responsible for the claims their distributors make, they must engage in robust education and training, monitoring, and enforcement to ensure distributors understand what constitutes compliance—and what doesn’t.

“Lavish lifestyle claims” offer the material trappings of success, either implicitly or by suggestion. DSSRC determines whether a claim meets the criteria based on its context and potential “net impression” of that claim on the audience. Examples include pictures of luxury properties, sports cars or statements such as “be set for life.” Additional trigger phrases that companies and distributors would be wise to avoid include “financial freedom,” “full-time income,” “replacement income” and “residual income.”

Awards or announcements of compensation that describe the earnings of any current or former distributor may be considered an earnings claim and may be appropriate if two criteria are met: (1) the company and/or its distributors have a reasonable basis for the claim at the time it’s made; and (2) the company and/or its distributors clearly and conspicuously disclose context related to the award or earnings to ensure the net impression is truthful and not misleading.

The “net impression” is the takeaway message, so to speak, of an earnings claim. According to the guidance, “The relevant audience to consider is that of a reasonable consumer when the claim is made to a general audience, such as posting the claim on public social media or the internet.” The relevant audience may be more specific—for example, top-tier sales force members—in which case, the net impression would be considered for that smaller group.

Determination of the net impression includes an analysis not only of words, but images and supporting language—for example, hashtags—that accompany the claim or are disseminated on the same social media account.

Disclosure: The Devil’s in the Details

Earnings claims should be backed up by substantiation verifying that the earnings stated are accurate concerning the individual or individuals in the claim.

If the earnings claim is not representative of generally expected results, it must be qualified as such in a clear disclosure, in a location close to the claim it modifies.

Hyperlinked disclosures may be used on occasion to complement or expand upon already visible disclosure language. If a disclosure is required to substantiate a claim and space constraints prevent its inclusion, DSSRC advises companies and distributors to avoid making those claims altogether.

Companies or Distributors Who Violate the Guidance Risk Agency Referral

DSSRC monitors earnings and product claims made by direct selling companies and their distributors through all means including websites and social media. The organization gives priority to content that appears to constitute a pattern or practice of non-compliance. Content identified through such monitoring that appears to be of an isolated nature may be forwarded to the company and resolved through a remediation process.

Companies have 15 business days to respond and may be asked to provide substantiation for the claim(s) and/or institute corrective measures to bring claims into compliance with DSSRC standards.

If the company doesn’t agree on the recommended corrective measures, it may file an appeal. Should the company choose not to respond or participate in the remediation process,

DSSRC will issue a case report indicating that the company was unresponsive or declined to participate. In that instance, DSSRC will publish an announcement on its website and refer the matter to the appropriate government agencies.

DSSRC was established in January 2019 and is an independent mechanism for the monitoring of product and earnings claims by all members of the direct selling channel. DSSRC is supported by the DSA, which is engaged in educational programs dedicated to the dissemination of this guidance. The guidance originated from dialogue between DSSRC, companies and their compliance teams.

“Based on collaborative feedback we have had with direct selling companies and industry professionals, DSSRC believed it would helpful to provide a document to the direct selling industry that reinforces principles from DSA Code of Ethics, the FTC Guides and other regulatory and self-regulatory precedent” said DSSRC Vice President Peter Marinello.

Mr. Marinello added that the guidance document is intended to evolve over time along with prevailing issues in the direct selling industry.