“The fact that leadership in companies has taken this stand is a very distinct change in culture.”

“This is a human issue, social issue and a justice issue.”

Several major direct selling companies are joining a growing chorus of corporations issuing public statements in support of racial equality after protestors poured into the streets across the country following the death of George Floyd, an unarmed black man who died in police custody on Memorial Day.

Historically reserved when it comes to speaking out publicly on social issues, the statements mark a rare move for direct sellers by wading into the area of advocacy on a high-profile topic laden with political context.

Executives say they have already received pushback and criticism for speaking out—in certain cases for not taking a strong enough position. Meanwhile, some direct sellers are now even pledging to adjust fundamentals of their business—including advertising and marketing, hiring practices, and product lines—to be more racially inclusive as a result of recent events.

The incident has sparked introspection and calls to fight racism by some of the most influential corporate giants in the country. 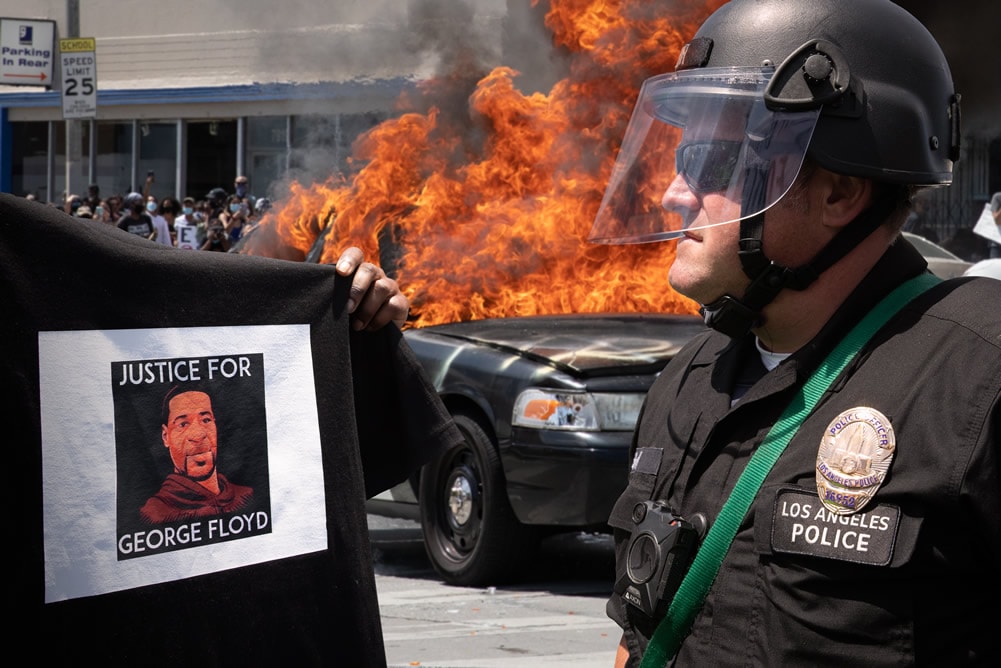 Leaders of some of the largest financial institutions—from JPMorgan Chase to Wells Fargo and Goldman Sachs—have expressed disgust with the events and called for a renewed fight against racism. Mary T. Barra, CEO of General Motors, says she was “impatient and disgusted.” And the iconic ice cream company Ben & Jerry’s says it’s time to “dismantle white supremacy in all its forms.”

Some of the brand names are no strangers to speaking out against racial inequality. Nike, for example, has been front and center on the issue for years by supporting former NFL quarterback Colin Kaepernick, who was essentially blacklisted from the league for kneeling during the national anthem at games in protest against police brutality.

But for direct selling companies, just making a statement of any sort is a big leap forward.

Generally averse to controversy, executives at Amway, Nu Skin, Shaklee and USANA have all made public statements since Floyd’s death as protests gave way to riots and weeks of civil unrest. Floyd’s death followed the recent deaths of other black citizens that has sparked outrage, including Ahmaud Arbery in Georgia and Breonna Taylor in Kentucky.

Arguably, the boldest statement came from Amway CEO Milind Pant, the first non-white chief executive of the largest direct selling brand on the globe. In a letter to Amway employees and distributors, Pant says “we are taking action” by donating to two organizations—the NAACP and the National Urban League—focused on fighting for social equality and “correcting a long history of injustice.”

Pant pledges to listen “intently to our colleagues and business owners who need us to take a stand” because “we are learning what we can do and how to be better.”

“There is great power in all of us working together to end racism. We vow to be part of the solution. We will hold ourselves accountable to these words,” Pant writes before ending the letter with a full embrace for the Black Lives Matter movement: “We are clear on where Amway stands. Black Lives Matter.”

Meanwhile, Shaklee CEO Roger Barnett says it’s not a matter of debate that systemic inequality exists. And that’s the reason why people were protesting in the streets, he says. In the past, the channel has generally decided not to “get engaged in issues of politics, but at the end of the day you have to do what’s right.”

“We have an opportunity in our channel to educate people,” Barnett says, “to have a conversation and to also lead.”

As part of Nu Skin’s response to Floyd’s death, the company and its nonprofit foundation are donating money to the NAACP Legal Defense Fund and the National Black Child Development Institute. CEO Ritch Wood says in a statement that he “felt sadness, fear and anger as I watched a video of a dying George Floyd calling out for help.”

Stand by Your Words

Connie Tang, a Chinese-born direct selling veteran who rose through the ranks of direct selling companies, most recently serving as president and CEO of Princess House, and who has endured racism as a minority in the channel, says the public statements are a good first step. They are better than saying nothing, but she says they can’t be a “one-time message.”

Tang also noted how unusual it is for direct selling companies to get involved in a high-profile social issue. “In the past, we tended to be much more conservative. The fact that leadership in companies has taken this stand is a very distinct change in culture,” she says. “It means companies are now willing to take a stand even if it means they might disenfranchise some of their stakeholders.”

In some cases, the decisions to issue public statements came with plenty of trepidation. That was highlighted during a recent online event hosted by the Direct Selling Association (DSA) in which several executives talked about their hesitation to speak up on the topic and the criticism that has followed. Some also admitted that as white men who live in a bubble and have never experienced racism, they simply couldn’t relate to the conversation.

Kevin Guest, CEO and chairman of USANA, says in his company’s initial statement that in the “wake of the horrific and senseless killing of George Floyd and the subsequent demonstrations and conversations held across the world,” it is no longer feasible to ignore a “systemic problem in our society, and we all have a responsibility to do our part to end injustice and intolerance.”

Guest then told his fellow executives during the DSA online panel that he was “very reluctant” at first to make a statement because “I don’t have the same experience others may have with racism.” But he says he was pressured by distributors and activist shareholders to “put a stake in the ground.”

“I was receiving messages like ‘being silent, you’re being complicit,’ ” he says. “And that silence is not acceptable in today’s marketplace.”

Ultimately, Guest says the issue has hit close to home. His son is married to a minority partner, and the couple is in the process of adopting a black child. And, Guest says, his children also took part in protests following Floyd’s death. “For me, it’s become a very real thing at a different level,” he says. 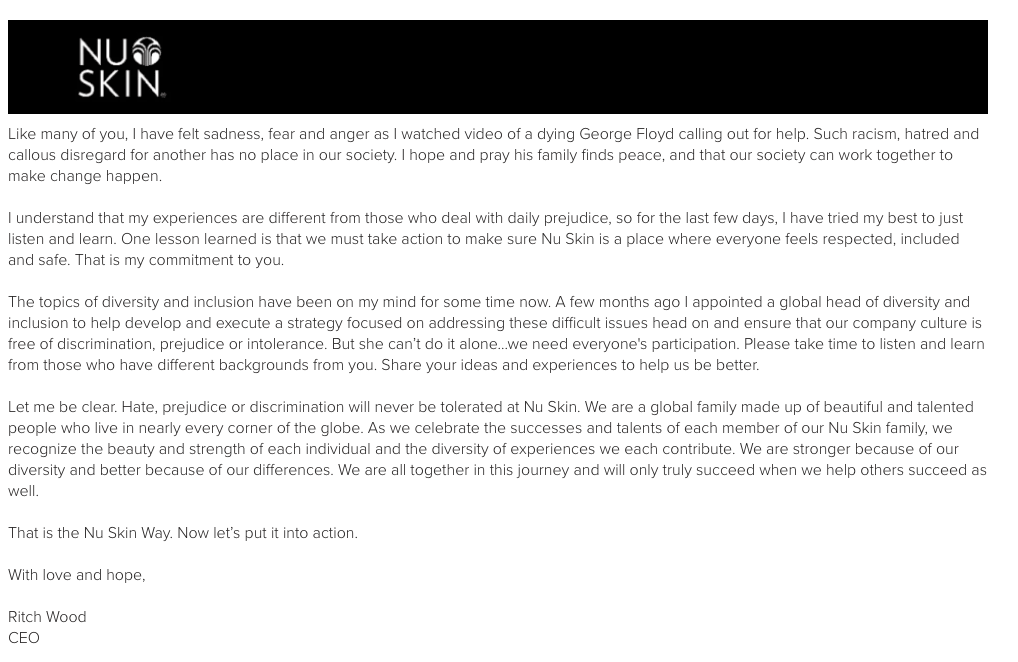 Likewise, Nu Skin President Ryan Napierski told the panel during the DSA online event he had similar uncertainty about making a public statement. In an interview with Social Selling News, Napierski says his initial reaction as a “white male of privilege” was to “just stay out of the conversation because we don’t want to get political and we’ve always avoided these issues.”

But before a Nu Skin management team made a final decision, Napierski says he asked a focus group of millennials within the company to weigh in. That group debated the issue for hours and convinced the company’s executives to get involved.

“Everyone is trying to figure out how to lean into this the right way,” Napierski says in a phone interview. “I really believe at some point we all have to be very sincere in saying what’s right is right.”

So far, Napierski says Nu Skin has had some customers push back against the company’s statements and ask why it’s getting involved in politics.

But he says that Nu Skin doesn’t view this as a political issue, and he’s had to remind them that the company’s position on racial equality doesn’t translate into support for riots, social unrest and defunding the police. “This is a human issue, social issue and a justice issue,” he says.

At Amway, the only company to mention Black Lives Matter in its public statements, there has also been some criticism leveled its way. But Angel Duff, director and managing counsel—Legal HR & Diversity & Inclusion, says that was expected and hasn’t fazed the company.

It was more important, she says, to make sure employees and distributors know that the company is standing up for them and is dedicated to creating a workplace built on inclusion. “It’s not political,” says Duff, noting the company felt a duty to make its public messaging bold and direct. “It’s an issue of humanity.”

Guest says after making the statement, “sure enough, scrutiny has come our way.” After the company released its statement, it was quickly forced to deal with another issue. “The question became, ‘What are you going to do now?’ When you say something and make a stand, that’s not enough right now,” he says. “Be prepared to take action.”

On that note, Guest says the company chose to “double down” on efforts through its foundation to help feed poor children and has formed an internal task force to keep dialogue on the issue of racial justice going. But USANA is not giving money or support to “outside groups,” even though he says activists have reached out to him.

Guest adds, “We just couldn’t be quiet. We had to be a voice.But we’ve stayed within the message and within the vision and direction of the company.” 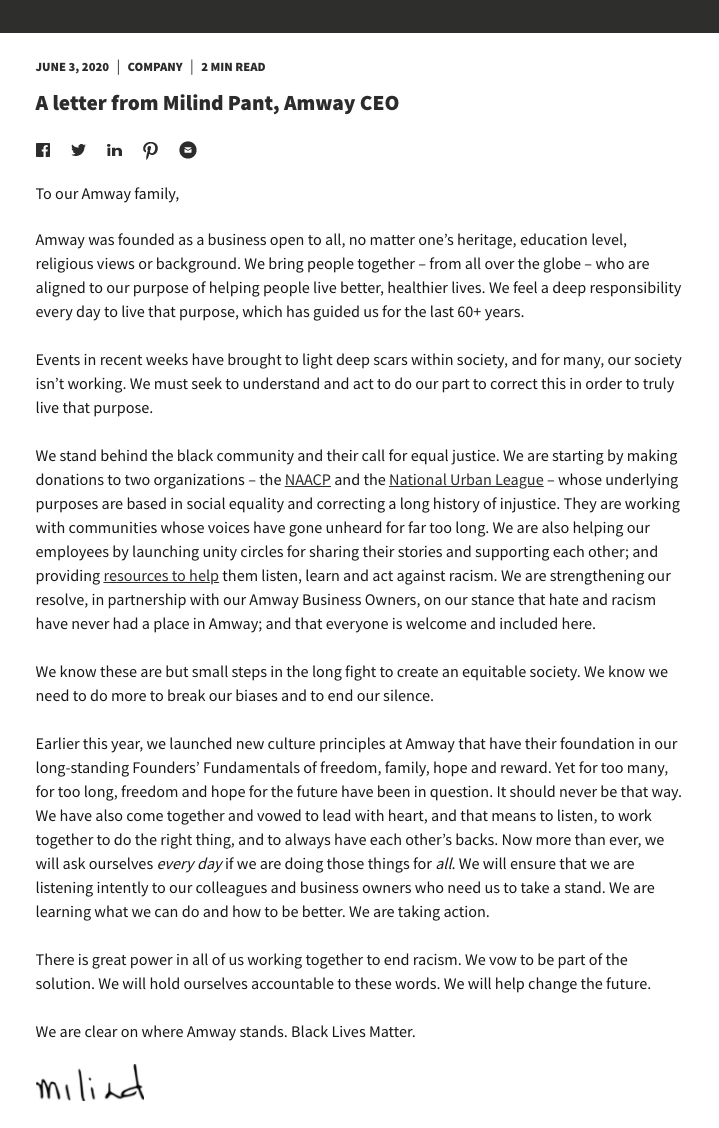 At Amway, leadership is also facilitating internal dialogue to help the healing process through so-called “unity circles,” where anywhere from 30 to 50 employees at a time discuss for hours the personal impact of current events and Floyd’s death.

The conversations are emotionally charged: “We haven’t had a session where there weren’t tears,” says Duff.

And at Nu Skin, Napierski says the company is now looking at how it markets products to “create an opportunity that is truly appealing for everyone.”

Also being examined is how the company crafts its job descriptions, along with trying to create new remote-work opportunities to enable recruitment of a more diverse field of candidates, reaching  outside of Utah.

There could also be some changes to Nu Skin cosmetics products, in particular, to make sure its foundation offerings “translate across different skin tones.”

“We want to be an empowerment company to all ethnicities, races and genders,” Napierski says.

What is the most important legal or regulatory...