Notice period text on notepad in an envelope with magnifying glass on blue background. Employment concept

The Association Urges Continued Self-Regulation in Lieu of New Rule 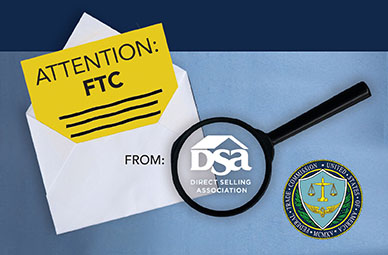 In response to the Federal Trade Commission’s (FTC) request for comments on its Advanced Notice of Proposed Rulemaking (ANPR) regarding earnings claims, the Direct Selling Association (DSA) filed comments on May 10, the final day allotted for public comment.

In the 21-page submission, signed by DSA President Joseph Mariano, the Association presented a detailed argument that a new earnings claims rule was not warranted, but that if a new rule was to be implemented, it should provide a balance between consumer protection and the ability of micro-entrepreneurs to establish and grow their small businesses. The letter urged the Commission to follow FTC precedent and advertising principles, including First Amendment protections for commercial speech.

The DSA’s letter begins by reminding the FTC to consider the impact of such a rule on the 6.8 million out of the 7.3 million direct selling participants in the U.S. that work their business on a part-time basis for the purpose of earning “modest extra income on the side,” providing the participants with flexibility, depending on their schedule and financial goals. The Association also points out that a significant number of women (76 percent) and Hispanics (23 percent) have sought out the direct selling opportunity and touts a 2018 Evolving Marketplace Study it conducted, reporting a reasonable average startup cost of $82.50 throughout the channel.

The Association also references its 2020 DSA/IPSOS Consumer Attitudes & Entrepreneurship Study finding that “seventy-nine percent of Americans have a favorable opinion of direct selling and see the business as an attractive option for entrepreneurship.”

DSA’s efforts toward self-regulation is reviewed in the next section of Mariano’s letter. He references the Association’s Code of Ethics and informs the Commission that both consumers and salespeople are able to file complaints with an independent Code Administrator if they wish to submit a violation of the ethics code. Mariano also points out that, according to the Code, earnings claims made by member companies as well as their independent salespeople must be “truthful, accurate, and presented in a manner that is not false, deceptive or misleading.”

The letter goes on to report that the Code of Ethics requires DSA members to adhere to a 90 percent inventory repurchase agreement that applies to inventory purchased by the salesperson within 12 months from date of purchase.

Additionally, Mariano urges the Commission to acknowledge the “extensive self-regulatory and compliance practices that already exist in direct selling.” He informs the Commission that the DSA, following the suggestion of senior FTC staff, has funded the independent Direct Selling Self-Regulatory Council (DSSRC) since 2019 and that this represents the Association’s largest expenditure each year.

For those false or misleading claims that the DSSRC has opened cases on, and subsequently referred directly to the FTC, Mariano reminds the Commission that these referrals save the FTC valuable time and resources.

The Direct Selling Compliance Professional Certification Program, launched in 2021 for member executives, is mentioned next. Mariano advises readers of the letter, “In its first three offerings, over three hundred executives have become certified through the program, which has sharpened the industry’s understanding of key concepts related to company compliance programs.” He also reports the establishment of the Compliance Officers Council of the DSA, which is “working on proposals to augment and bring consistency to compliance practices across the direct selling industry for both members and non-members.”

The DSA’s letter recognizes that the FTC’s loss of monetary relief via Section 13(b) of the FTC Act after the AMG Capital Management v. FTC Supreme Court case is a primary motivation for the Commission to seek a new earnings claims rule.

Yet, the letter reminds the Commission that it still has many remaining authorities that provide for action against this type of unlawful conduct; Section 19 of the FTC Act allows for monetary relief and financial restitution for consumers following administrative complaints and actions in response to violations—a tool that the FTC has recently used more frequently.

By utilizing the existing powers of the FCT Act, Mariano prompts the Commissioners to remember that, “Sections 13 and 19 in particular, afford the FTC great flexibility in how it can bring and structure lawsuits and the types of relief it can obtain. The FTC can bring an action under Section 13 for injunctive remedies and Section 19 for monetary relief. The Commission is not powerless to collect money for consumers.”

The DSA also points out that individual states’ ability to obtain monetary relief was unaffected by the AMG decision and notes that the Penalty Offense Authority remains available to the Commission to pursue punitive monetary action against violators.

Mariano further states that the FTC’s authority should come from Congress. Citing the example of the COVID-19 Consumer Protection Act, passed by Congress in 2020, he presents the DSA’s position that this law “provides a good example where Congressional legislation has provided tools to protect consumers and guard against consumer harm.”

Case Law Does Not Support the Need for New Rule

The proceeding nine pages of the DSA’s public comment provide a sourced argument that the FTC would be “fundamentally at odds” with Commission advertising principles and previous case law were it to establish a new rule.

The DSA calls into question the FTC’s targeting of earnings claims for “prescriptive regulation” and its treatment of these claims as “fundamentally different than all other advertising claims.”  Furthermore, the DSA’s letter questions why the Commission is considering precluding the use of disclosure statements and disclaimers for companies offering business opportunities when they are widely accepted in other industries and marketing channels.

The Association’s letter provides a lengthy argument that the First Amendment provides substantial protections for commercial speech and documents several instances where the Commission has in the past acknowledged these protections. The letter also states that “First Amendment jurisprudence has long expressed a strong preference for the use of disclosures in advertising in order to modify statements that might otherwise be construed as misleading.”

The final pages of the DSA’s public comment on the FTC’s ANPR on earnings claims list the Association’s recommendations for alternatives to a new rulemaking. First, it calls for increased reliance on independent self-regulation through the DSSRC, citing deterrence and swift action as strengths of this program—goals that the FTC specifically cited in the ANPR.

The letter also recommends that the Commission emphasize and promote individual efforts by companies to regulate their own business by tracking compliance, stating that these compliance metrics could then be provided to the FTC. The DSA writes that companies able to demonstrate specific compliance practices should be given consideration by the Commission before it proceeds with action under a potential new rule.

Are Your Company’s Core Values Driving Your Success?