Company and former CEO to pay $150 million in fines

“Those who proceed without observing what the FTC is saying do so at their own peril.”

“The FTC has not conducted investigations of this depth before and for the first time the agency has focused on qualitative evidence, which includes high-pressure sales tactics.”

The harsh penalty levied by the Federal Trade Commission (FTC) on one of direct selling’s stalwart companies has channel experts guessing about the FTC’s tactics—and struggling to predict what actions might draw the attention of the government agency.

Direct selling attorney Spencer Reese says “the game has changed” as a result of this settlement with AdvoCare. Reese asserts that the FTC has not conducted investigations of this depth before and that for the first time the agency has focused on qualitative evidence, which includes high-pressure sales tactics.

“The FTC is on to the stories, the rags to riches, and the heartstrings stories,” says Reese. “Claims considered high-pressure and that invoke FELO (fear of loss), and anything that pressures reps to take financial risk, are targets.”

Katrina Eash, partner at Winston & Strawn, LLP, agrees that for leaders of direct selling companies, the AdvoCare episode is fair warning that scrutiny of business practices is at a higher level.

“I’m not surprised the FTC held a press conference,” says Eash. “However, the amount of materials they released did surprise me. The FTC seems to be riding a press wave to help consumers understand where a legitimate MLM company ends and a pyramid scheme begins.”

As reported in Social Selling News in June, AdvoCare announced it was changing its business model from multi-level marketing to direct-to-consumer and single-level marketing effectively terminating the businesses of tens of thousands of distributors. It was, at the time, a shocking development in the channel.

But then the hammer came down Oct. 2, when the FTC announced penalties it is enforcing against the Texas-based company that include a $150 million settlement and an agreement to stay out of multi-level marketing permanently.

The FTC charged AdvoCare was operating a pyramid scheme based on three assertions: that its compensation depended on a distributor’s ability to recruit, that it required product purchases that were considered excessive, and that its recruitment tools included a claim that one could become wealthy.

However, within hours of the FTC announcement, AdvoCare released a statement saying that the agency had some facts wrong in its announcement.

“We strongly disagree with the FTC allegations, but we are committed to abiding by this agreement and moving forward. The strength of AdvoCare is and always has been our highly-valued health and wellness products, which remain in great demand by our hundreds of thousands of loyal customers,” AdvoCare CEO Patrick Wright said in the release. “We will continue to stand behind our distributors, employees, and customers and to uphold our values of integrity and transparency, as we have for over 25 years.”

The statement continued to explain that its business model revision earlier in 2019 has resulted in strong sales and that it has invested in new products. The company also made it clear that its products’ effectiveness was not part of the FTC ruling, which dealt exclusively with its multi-level compensation model.

The FTC reported that 72 percent of AdvoCare distributors earned no compensation, and another 18 percent earned less than $250 annually.

“Legitimate businesses make money selling products and services, not by recruiting. The drive to recruit, especially when coupled with deceptive and inflated income claims, is the hallmark of an illegal pyramid.” said Andrew Smith, Director of the FTC’s Bureau of Consumer Protection. “The FTC is committed to shutting down illegal pyramid schemes like this and getting money back for consumers whenever possible.”

Smith said the $150 million will be distributed over the next several months to individuals who lost money through AdvoCare’s multi-level marketing plan.

The announcement prompted plenty of reaction from multi-level marketing attorneys, especially when considering that AdvoCare had no previous flirtations with FTC violations and has been considered one of the channel’s most successful organizations.

Attorney John Villafranco, of law firm Kelley Drye, says for other companies operating in the direct selling space the message has been delivered.

“The FTC might move slowly, but it definitely moves,” he says. “It’s clear the kind of practices it considers to be unfair and deceptive. They’ve made it clear where the lines are. There is no question there’s a role for direct selling, but for those who proceed without observing what the FTC is saying do so at their own peril.” 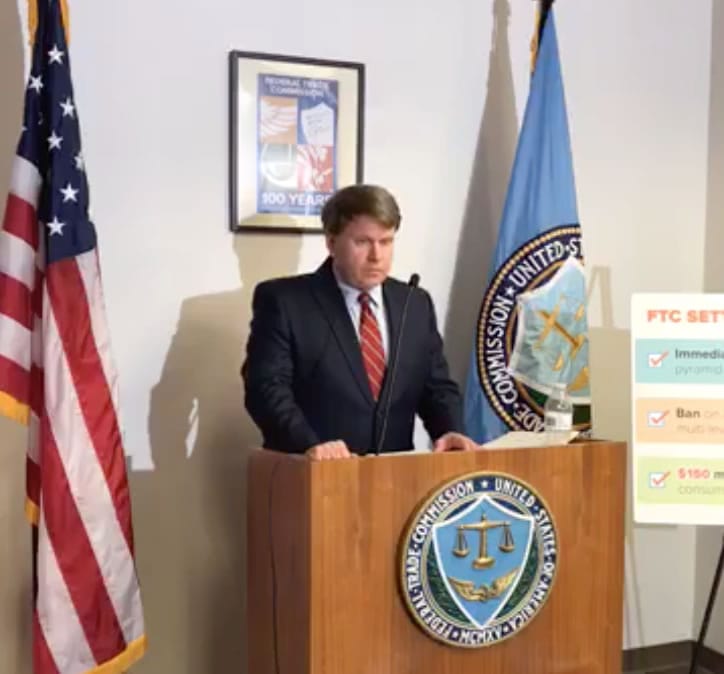 AdvoCare Runs Afoul of the FTC

Attorney John Sanders, who has represented AdvoCare and other direct selling companies, says it may have begun with some adverse media attention—a high-profile investigation that aired on ESPN in spring 2016. That piece highlighted an individual who quit his job and borrowed $50,000 to pursue riches as an AdvoCare distributor, in part because of the company’s high-profile endorser, New Orleans’ Saints quarterback Drew Brees.

“The FTC says they started it in November 2016 after a flurry of inaccurate claims regarding the business opportunity,” Sanders said of the FTC inquiry, indicating that it was just six months after the ESPN piece aired.

Eash says that the FTC appears to have its eyes on the direct selling channel and is making good use of the media.

“The FTC is using this as a media platform,” she says. “They’re saying nothing new, they’re focused on the same issues they’ve been focused on for years—false and misleading statements about the opportunity, pushing recruitment over retail sales, and that distributors had to purchase product every month.”

Not the End of the Model

Eash says, “The key message is that this is not the death knell to multi-level marketing. The FTC said it is not illegal and can be done right. But companies should double down on their policy and procedures with a compliance team that has power to enforce the policies, and they need to monitor and document compliance.”

Given the FTC attention, many direct selling companies have done just that—adjusted their policies and emphasized the importance of following rules to distributors who have often operated independent of the parent company.

In some cases, distributor actions have attracted FTC attention and investigations have been launched without the parent company being aware of the rogue distributor’s actions.

“In the industry people could view this as a hallmark, a new day in the industry,” says Sanders. “We don’t view it that way. There have always been these issues. They need to be careful and put in place robust policy and procedures as far as income and lifestyle claims, and watch statements made by both executives and top-level distributors.”

The FTC news included another aspect that focuses on the relationship between companies and their distributors. The FTC’s individual charges are against former CEO Brian Connolly and four other individual distributors, two of whom settled for $4 million.

As emphasized above, Villafranco says companies must keep a close eye on the activities of their distributors. “It has to be clear that if you have distributors making claims, it puts the company and themselves at risk,” says Villafranco. “The law doesn’t impose upon a company the need to have complete vision over distributors, but it does require training, monitoring and enforcement. A company can’t turn a blind eye when it comes to earnings representations.”

The result for companies moving forward, he says, is that having good products and a strong base of distributors is not enough to evade the eyes of the FTC.

In an article written by Villafranco after the FTC announcement, he concluded that the AdvoCare penalty broke new ground in the area of enforcement.

“It goes well beyond the limitations imposed in the Herbalife settlement and suggested by the FTC’s multilevel marketing business guidance by prohibiting AdvoCare from participating in multilevel marketing altogether,” Villafranco wrote. “Specifically, the order prohibits the company from participating in any plan where the participant recruits others to a downline and receives compensation that is based, in whole or in part, upon purchases, sales or any other activities of the downline.”

He called that a “notable departure” from prior FTC penalties.

A past that haunts us