How direct selling companies can benefit

By:  John T. Fleming and Robert A. Peterson 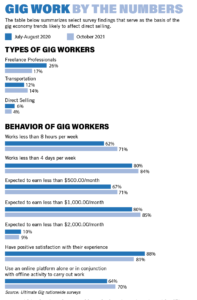 With more than 57 million Americans involved and over $1.4 trillion changing hands annually, the gig economy and its rapid growth reflect people’s desires for more flexible work opportunities and greater freedom regarding how, when, and where they work.

Understanding how this growing sector of the economy works, especially what drives the choices and behaviors of people who choose to work gigs, is critical to the future success of any business that wants to connect to this pool of talent. The Ultimate Gig Project team has been studying the gig economy and its workers in considerable detail, focusing on exploring the nuances that exist in gig economy work and the similarities and differences among gig workers.

Our most recent empirical research, which includes nationwide surveys conducted in July 2020 and October 2021, uncovered four trends that may portend the future of the gig economy:

Let’s begin with an overview of what it means to be working in the gig economy today.

It is certainly possible for any particular gig worker to leverage more than one, and perhaps all, of these. In fact, more and more people are choosing to do so. Our survey data found the number of gig workers with multiple gigs increased 14 percentage points—from 55 percent to 69 percent—in just over a year.

We believe this indicates that a significant percentage of gig workers are becoming aware of the incredible possibilities available in the gig economy and are taking steps toward becoming more micro-entrepreneurial. Many gigs also complement other gigs, creating synergies for workers looking to maximize their investment of time and energy. For example, a Lyft driver who has friendly conversations with passengers may find customers for her pet-sitting service.

Gig work continues to be a part-time endeavor. Most gig workers (71 percent) spend less than 8 hours per week on their gig. Whether they work one gig or multiple gigs, people fit gig work into other life and work priorities, benefitting from the flexibility to perform tasks when and where they choose.

Technology has played a big role in shaping the modern gig economy and continues to transform how people work. Technology has enabled simplicity throughout the gig economy, including in areas of customer acquisition, service and payment. For gig workers, this often means being able to accomplish more within the time they are able to devote to their gig.

We see the increased role of technology in our surveys. More gig workers (70 percent) in the most recent survey reported using an online platform in conjunction with offline activity than in the earlier survey (64 percent). Because a growing percentage of gig workers are using online platforms, the time spent on a gig is more focused on using digital technology versus requiring a physical presence. We speculate that this shift supports the trend toward working multiple gigs.

What does this mean for direct selling?

Forward-thinking direct selling companies have an opportunity to increase market share in the gig economy in an environment where working multiple gigs is becoming more popular. In the U.S. today, there is a vast pool of people (some 57 million or more in the United States and growing) who have chosen gig work. Many of them (70 percent) are already opting to work multiple gigs. Yet, a small percentage (6 percent in the first survey and 4 percent in the second survey) have chosen direct selling.

In terms of the type of work, direct selling can fit well with many other types of gig work. By positioning their business as a complementary gig, direct selling companies can find people who already identify as someone who enjoys working in this flexible, independent way.

Traditionally, many direct selling companies have taken the position that those who choose direct selling make an exclusive choice relative to the earning opportunity with which they will engage. This positioning, if it still exists, is challenged by the behaviors we have identified through our research on the gig economy. There is a trend—more gig workers are working multiple gigs because it is possible and, in some cases, easy to do.

Direct selling companies will be smart to embrace such behavior. One direct selling company does not necessarily conflict with another. The marketplace of new gig workers and micro-entrepreneurs is obviously attracted to the freedom of choice.

Strategic direct selling company executives should also note the rise in popularity of digital platforms within the gig economy. As a whole, direct selling companies were slow to make mobile apps a key component of their business model. Those who wish to compete with top-tier gig opportunities should prioritize ongoing investment in the technology that enables their independent contractors to sell and serve customers. Customers and gig workers love engaging with intuitive, modern digital platforms. Businesses that don’t offer this will lose market share to those that do.

We forecast the gig economy will continue to grow, both in the number of participants and the dollar volume transacted. Direct selling companies that embrace the use of digital platforms and associated virtual technology will attract more individuals looking for a secondary, or perhaps even a primary, gig.

The increased number of gig workers working multiple gigs will impact direct selling models, and this should be expected. Gigs can complement one another. The gig worker benefits from being able to leverage underutilized assets, time, knowledge and skills even more effectively. Gig-providing companies benefit from the pool of candidates for flexible income opportunities continuing to grow.

Gaining more market share should be a strategic priority.

The DOL’s effort to rescind the final rule runs counter to the realities of the modern economy.

We will continue working with the Administration and Congress to ensure direct sellers are clearly classified as independent contractors under all federal laws.

An array of business groups are suing the U.S Department of Labor over its decision to rescind a rule that would set parameters for when companies—including direct sellers—could classify workers as independent contractors.

At issue: a Donald Trump administration regulation published in late January, about two weeks before the White House was set to switch hands, making it easier for businesses to classify workers as independent contractors. The rule marked a major victory for the direct selling channel, along with gig economy companies specializing in ride-sharing and food delivery.

The Direct Selling Association (DSA) has reported that 60 percent of U.S. direct selling companies responding to the Quick Pulse surveys it conducted over the course of the COVID-19 outbreak report a positive impact from the pandemic. Data was last gathered Dec. 7-9.

The channel appears to have demonstrated a strong ability to flex to a virtual environment to sustain income for entrepreneurs, unlike other gig economy opportunities.

New year begins with lots of good news for the channel

Though many uncertainties remain for 2021, to be sure, most of us are just glad 2020 is over. There’s something satisfying about packaging up the past in a neat little 12-month box and putting it away to focus on the year ahead.

“Once finalized, it will make it easier to identify employees covered by the Act, while respecting the decision other workers make to pursue the freedom and entrepreneurialism associated with being an independent contractor.”

“The goal would be to properly classify the field as independent contractors not subject to any test.”