Company claims intimidation and ‘attack on the industry’ by the FTC

“If AdvoCare settles, and we settle, and the next company settles, then that becomes de facto the guidance …” 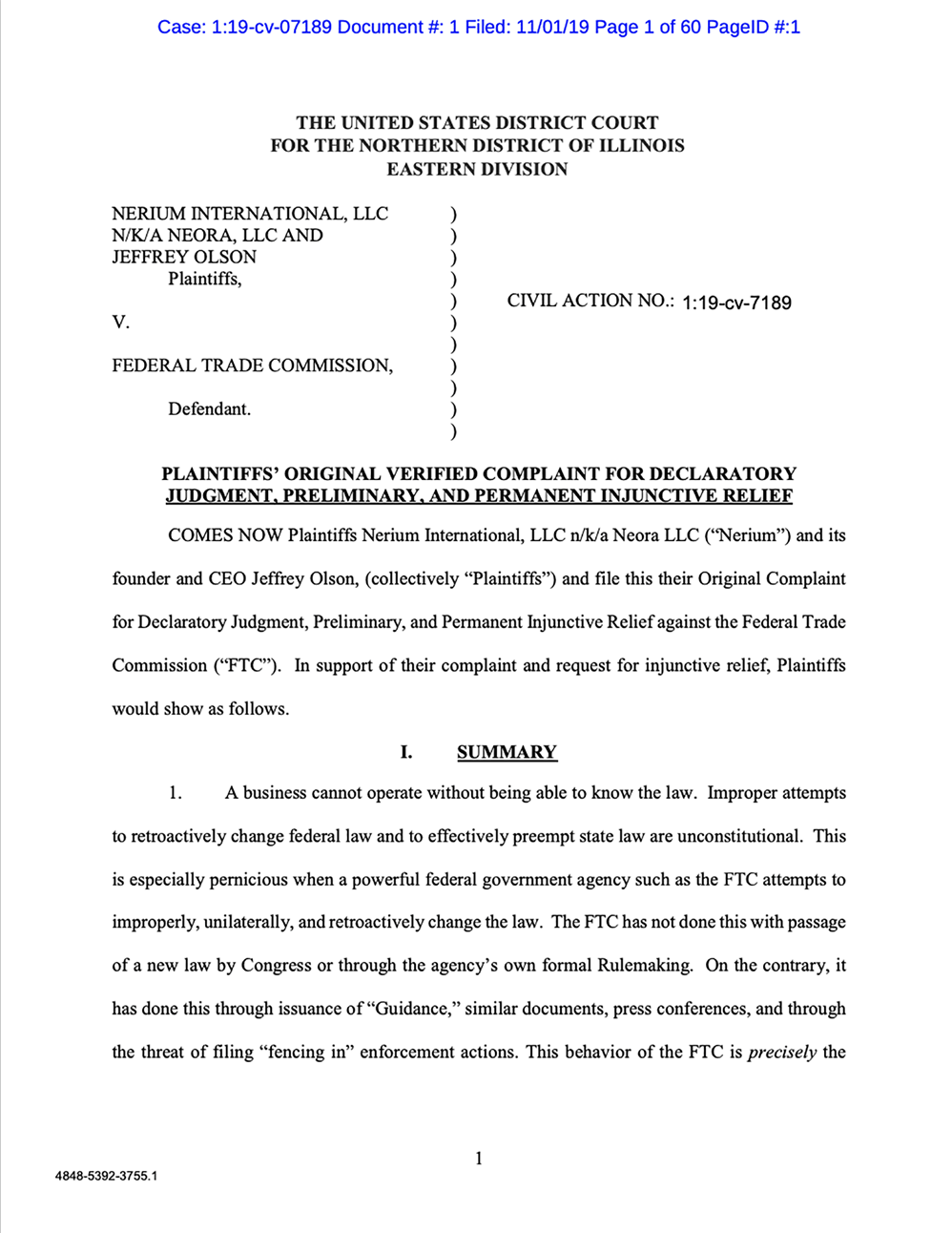 Neora is fighting back against a Federal Trade Commission (FTC) lawsuit labeling the company an illegal pyramid scheme.

In what channel experts say is an unprecedented move, the direct selling company has filed its own lawsuit against the FTC, claiming the federal agency is retroactively trying to change the definition of a pyramid scheme under federal law. Neora’s countersuit was filed hours before the FTC brought its own charges against the company in a different federal court.

The lawsuit seeks to block the FTC from continuing what Neora described as intimidation tactics focused not only against the Texas-based company but on the entire direct selling channel, saying “no direct sales company is safe under the FTC’s new arbitrary retroactive standards.”

According to the lawsuit, Neora is accusing the FTC of pursuing enforcement actions against it and other direct sellers despite a recently issued executive order by President Donald Trump. That executive order effectively sought to block federal regulatory agencies from pursuing changes to regulations already on the books without first going through the process for making new federal regulatory enforcement rules, as well as providing public notice so businesses can “know in advance the rules by which the Federal Government will judge their actions.”

In its lawsuit, Neora is now asking a judge to declare that its business is not a “pyramid scheme” and prevent the FTC from pursuing a “civil administrative enforcement proceeding” against Neora and other direct sellers that are already considered legal under state laws.

In the past, companies such as Vemma and Herbalife have settled with the FTC after the agency put the companies in its crosshairs. Burnlounge, a digital music store that was sued by the FTC in 2007, fought government regulators in court—and lost.

Most recently, Texas-based AdvoCare announced it would no longer operate with a multi-level compensation plan, agreeing to pay $150 million to settle charges that it “deceived consumers into believing they could earn significant income as distributors of its health and wellness products,” according to the FTC.

Neora officials say the FTC’s latest action is an “attack on the industry,” and that AdvoCare’s decision to settle with regulators and exit the direct selling space influenced the move to fight back with their own legal action. Despite attempts to settle with regulators, Neora Co-CEO Deb Heisz says the FTC essentially gave the company one option: Agree to stop paying compensation upline.

“We decided to move forward with this lawsuit when it became imminently clear in the last 30 days that the FTC was not going to settle unless we agreed to not be a multi-level marketing company,” says Heisz. “That’s where we put our stake in the ground.”

Heisz added: “The industry looks at things like Vemma and Herbalife for guidance. If AdvoCare settles, and we settle, and the next company settles, then that becomes de facto the guidance other companies are going to look at and say, ‘that’s what we need to do to be compliant.’ ” 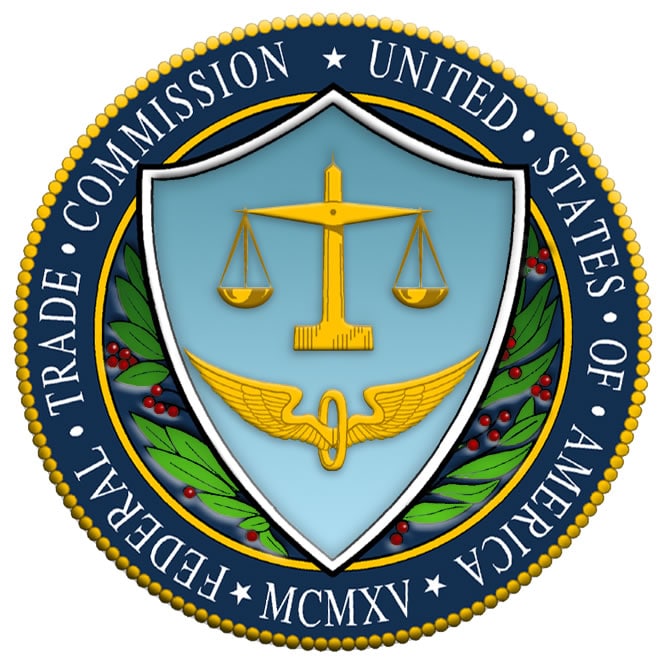 The FTC has been looking into the business practices of Neora, formerly known as Nerium, since at least 2016, according to the lawsuit. That’s when the FTC’s Chicago office started an investigation over product claims into a Nerium supplement called Nerium EHT. Since then Neora says it has spent “millions of dollars” to produce documents and copies of its internal databases, and to hire a prominent economist to conduct a detailed analysis of its business model.

Neora, in its lawsuit filed under Nerium, says, “FTC Chicago Staff’s pyramid scheme allegations are legally and factually flawed. Instead, the FTC seeks to preclude Nerium, and seemingly numerous other entities, from being able to operate as an MLM, and indeed improperly threaten Nerium’s existence as a company.”

Neora hired Walter Vandaele, an economist who worked with Herbalife during its FTC saga, to conduct an analysis of its business operations. According to the lawsuit, Vandaele’s analysis showed that 77 percent of commissions paid by Nerium between 2012 and 2017 were for sales of product to ultimate end users. The analysis, according to the lawsuit, also shows that about 82 percent of commissions paid through the company’s compensation plan is based on sales of products.

“We’re a perfectly legitimate company offering a business opportunity to millions of Americans,” says Heisz. “But how can we operate a business in the United States if we don’t know what the rules are?”

The Neora lawsuit accuses the FTC of intentionally failing to distinguish between what it says are legal direct sellers and illegal “pyramid schemes,” labeling all companies that pay “incentives … for recruitment of participants” as pyramids.

There is no federal law defining what a pyramid scheme is. But the FTC, in recent years, has issued guidance and press releases, and agency officials have given speeches to direct selling groups outlining parameters. The agency has made clear that it will crack down on companies with compensation plans that reward wholesale purchases by a distributor or when a company is paying distributors to recruit, instead of selling products to legitimate customers.

However, Neora argues that the FTC has essentially created a new pyramid scheme test, one that it calls a “wholly subjective over-emphasis on recruiting” test.

Neora argues that the FTC has now moved to “fence in” multi-level compensation programs to “only allow commission payments to the business opportunity participant who actually makes the product sale and perhaps only one person above the seller (thus eliminating the ‘multi’ from multi-level marketing).”

Direct selling experts say the FTC has long resisted bright lines and rules that can be applied objectively to regulate the channel. That has made it difficult for direct selling companies to know “whether what it is doing is going to be viewed by a court as being against the law,” says Larry Steinberg, chair of the Multilevel Marketing Industry Group at Los Angeles-based law firm Buchalter.

Steinberg says there are elements of AdvoCare’s and Neora’s business models and compensation plans that have been condemned by the FTC, but are not that different from similar provisions present in those of many other network marketing companies.

“Nerium makes arguments that the industry has been making privately for years, likely drawing applause in MLM boardrooms around the country,” says Steinberg.

“The Federal Trade Commission has taken the position that its statutory mandate to prosecute  ‘unfair or deceptive acts or practices’ gives it great discretion, and is necessary to carry out its mandate to protect consumers,” says Steinberg.

He adds, “This has left network marketing companies in the untenable position of not knowing whether some element of their business model or compensation plan is going to fall on the right or wrong side of the line.”

With settlement talks at an impasse, and Neora unwilling to agree to the FTCs demands to change its core business model, the company was likely in “survival mode,” says Steinberg, forcing it to take the “unprecedented” step to proactively file litigation against the FTC.

“It is the prospect of a possible injunction, receiver and asset freeze, and the costs (both business and monetary) of years of litigation which cause companies like Herbalife and AdvoCare to agree to a settlement,” he says. “These settlements often contain provisions which go beyond anything that can be justified by case law or precedent.”

For it’s part, the FTC argues in its lawsuit against Neora that the MLM “pushes distributors or brand partners to focus on recruiting new distributors, rather than retail sales to customers.”

The FTC alleges that Neora made promises of “lifestyle-changing income” to its recruits, and social media posts boasted about six-figure incomes. However, the FTC says Neora’s compensation plan “makes it unlikely that distributors could make money by selling products to legitimate customers.”

In a press release announcing the agency’s actions, Andrew Smith, director of the FTC’s Bureau of Consumer Protection, says pyramid schemes “depend on recruitment of new participants to pay out to existing participants, meaning that the vast majority of participants will ultimately lose money.”

“Nerium promotes its business by misrepresenting that BPs (business partners) can earn a substantial income and achieve financial independence,” the federal agency alleges in its lawsuit. “Despite the claims of profitability, Nerium’s compensation plan is structured such that, at any particular time, the majority of BPs will not make the substantial incomes represented, and will, instead, lose money.”

Consumer group TruthinAdvertising.org, a nemesis of the direct selling channel, applauded the FTC’s actions against Neora in a statement.

“The consumer harm caused by Nerium’s deceptive marketing tactics cannot be understated. Not only did consumers lose money with Nerium, but individuals with serious health issues were lured into this scheme with promises that Nerium products could cure their ailments,” says TINA.org’s Executive Director Bonnie Patten. “Let this be a warning to all MLMs that such malfeasance and brazen disregard for the law will simply not be tolerated.”

Now that the dueling lawsuits have been filed, the question of jurisdiction becomes important.

The FTC filed its case in New Jersey, while Neora strategically opted to file its counterclaim in an Illinois federal court. That’s where the Seventh Circuit Court of Appeals only has appellate jurisdiction, and that’s the same appeals court that handed the FTC a huge loss recently when it removed the agency’s ability to claim restitution for victims—a potentially precedent-setting case.

Whether the case eventually plays out in Illinois or New Jersey will be the subject of much legal maneuvering moving forward. The FTC has reason to prefer one state one state over another. “The FTC,” says Steinberg, “is eager to avoid litigating in the Seventh Circuit.”

But he cautions that Neora will have an uphill battle on its hands: “No network marketing company has ever prevailed in a regulatory enforcement action brought against it by the Federal Trade Commission.”