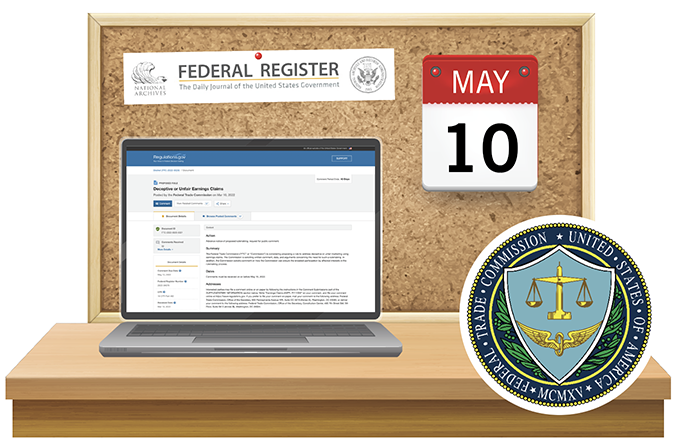 The Federal Trade Commission (FTC) published its Advanced Notice of Proposed Rulemaking (ANPR) as well as a request for public comment concerning false, misleading and unsubstantiated earnings claims to the Federal Register on March 11.

This action starts the clock on a 60-day window in which the public may submit written comments, data and arguments in regard to the need for such a rulemaking. All public comment submissions are due by May 10.

The Commissioners also included in the ANPR a multitude of specific questions about various aspects of a potential new rule in an effort to guide and assist the public in its responses.

A New Day for Mag-Moss

The rulemaking process utilized by the Commission in the current ANPR is called Magnuson-Moss (Mag-Moss) Rulemaking and is codified in Section 18 of the FTC Act. Mag-Moss Rulemaking is one of two methods available to the FTC for creating new rules; the other is the Administrative Procedure Act (APA).

Unlike APA rulemaking, Mag-Moss rules do not require direct congressional authorization. However, this process has many more steps than the less formal APA rulemaking and is rarely used due to these additional procedural requirements and the years-long timeline to promulgate a new rule.

While current commissioners acknowledge the “burdensome” nature of Mag-Moss, the loss of the Commission’s ability to seek equitable monetary relief for injured consumers under Section 13(b) after the Supreme Court decision in AMG Capitol served as a catalyst to reinvigorate the FTC’s interest in utilizing Section 18. It served as another way to return money to consumers harmed by the deceptive and unfair conduct of FTC targets.

Furthermore, the Commission implemented several changes to the Mag-Moss rulemaking procedures in 2021 under its Rules of Practice, intended to streamline the process as well as make it more accessible to the public.

“Self-imposed red tape has only created uncertainty and delay for the important business of this Commission. The imposition of those requirements decades ago was the FTC’s signal to the business world that the brief era of Section 18 rulemaking had come to an end.

“With the adoption of these streamlined procedures we wish to signal a change in Commission practice and ambition: that we intend to fulfill our mission to protect against unfair and deceptive practices in commerce and provide consumers and businesses with due process, clarity, and transparency while crafting the rules to do so,” Slaughter stated.

We have launched a task force that is crafting our response and strategy. This is an important issue, which will continue being top of mind for the industry and Association.

Disclaimers, Disclosure Documents and Statistics Reports Under the Microscope

The ANPR provides insight into several areas where the Commission is considering “regulatory alternatives” for businesses offering money-making opportunities, including direct sellers.

The first of these is the FTC’s concern about the ability of disclaimers to offset misleading impressions arising from atypical earnings claims.

“Further, research by the Commission has found that even clear and prominent disclaimers of ‘Results not typical’ or the stronger ‘These testimonials are based on the experiences of a few people and you are not likely to have similar results,’ are not sufficient to dispel the implication that a testimonial depicts typical results.”

The Commission asks the public to provide “comment, information, and evidence on whether a disclaimer can be sufficient to correct an otherwise misleading impression created by earnings claims, and, if so, whether and how the issue should be addressed in a rule.”

The second topic mentioned is disclosure documents. The Commission mentions the Franchise and Business Opportunity Rules, reminding the public that both rules include requirements that businesses provide prospective participants with a document containing information about earnings and asks for comment on several related questions:

After the Business Opportunity Rule was proposed in 2006, members and representatives of the direct selling channel responded en masse to the FTC to successfully win a functional, if not technical, exemption from the Rule and its disclosure requirements before its implementation in 2011.

Thus, the Commission’s consideration of disclosure requirements to be included in a new earnings claims rule is a significant development with the potential to impact the entire direct selling channel.

The third item discussed in detail in the “Objectives and Regulatory Alternatives” section of the ANPR is the earnings data and statistics provided by an industry or professional field for the purpose of promoting a money-making opportunity. The Commission suggests that these statistics are sometimes “misleading” and asks the public to comment on whether a prohibition of industry data on earnings should be included in the new rule.

The ANPR continues by referencing multilevel-marketing companies directly on the topic of earnings claim substantiation. The Commissioners cite earnings claims made by direct sellers that do not take into account material expenses and question whether gross income and incurred expenses should be required components of any earnings claim.

The Commissioners ask the public to comment on whether to impose a record-keeping requirement for substantiation evidence and, if so, then ask for the type of format and timeframe for which records must be kept. They also request feedback about ways to streamline the requirement to minimize costs on businesses.

In addition to providing details about the Commission’s objectives and motivations behind its quest for an earnings claims rule, the ANPR provides detailed questions from the Commissioners “designed to assist the public” in submitting its comments.

As of this publishing, 51 public comments have been submitted to the FTC and posted to the Regulations.gov website, along with the text of the ANPR. While the Commission requested feedback on behalf of all business models that offer money-making opportunities, 45 of the 51 comments are about direct selling, and all but one of these testimonials are extremely critical of the channel.

A majority of entries are coming from former company representatives detailing their experiences being harmed by unrealistic earnings claims. At least 15 direct selling companies have been named so far in this comment list.

Examples of these comments are:

—“It is my belief that earnings claims should be limited to stating what the average earnings are for a position or opportunity. ‘Up to’ earnings claims should be illegal for MLM companies in particular as they regularly use false claims to make potential recruits think the recruiter is more successful than they are. They literally say ‘fake it until you make it’. They also use the false claims of ‘successful entrepreneurs’ who want to find people to mentor. Please close these loopholes.”

—“In my brief experience with MLMs in 2014 — they’re extraordinarily deceptive. There’s a ton of pressure to buy your own products to make it to the next level as an ‘investment’, when ultimately relying on your own connections is an unsustainable business model.”

—“I am now seeing constant DMs over Instagram asking me to join… Some are trying to recruit me due to health issues and some because my 9-5 job is working in Finance. All of them state that I will have so much more freedom and so much money and I would be so good at it but I like my job, get paid well and I don’t have to work on nights, weekends and vacations.”

—“The selling of a lifestyle always occurred. My uplines always showed off their houses, cars, trips, the organic food they could afford, etc. My other upline ‘retired’ her husband that worked in the oil fields. The use of that was also really impactful. The emotional pull to be just like her was hard to ignore. It made me feel like I could do that too. Again, if I just worked harder. The diamond leader (the top of my upline) showcased her home remodel, their vacation home, retiring her husband, and much more….”

Many of the specific questions posed by the Commission in the text of the ANPR have, to date, been left unanswered by the public commenters.

Coming on the heels of the FTC’s October 2021 Notices of Penalty Offense sent to hundreds of direct sellers to put them on notice regarding deceptive earning claims and testimonials, a new earnings claim rule, if passed, will allow the Commission to seek both punitive monetary actions against targeted direct sellers under Section 5 of the FTC Act as well as equitable monetary relief for consumers that were harmed by these claims under Section 19.

In official remarks published at the time of the ANPR, FTC Chairwoman Khan explained her motivations for seeking both avenues of monetary action against FTC targets, including small-time scams as well as large companies.

“In the Commission’s prior actions, the money won back for harmed consumers generally relied on our 13(b) authority, a path that is no longer available to the FTC after the Supreme Court’s decision in AMG. In the wake of this loss, the Commission has been identifying additional ways it can use its broader toolkit and authorities to secure redress and penalties for lawbreakers.

The Direct Selling Association (DSA) submitted written comments to the FTC prior to its Feb. 17, 2021, public meeting announcing the ANPR on Earnings Claims. The letter, approved by the Government Relations Committee, asked the FTC to carefully consider whether an earnings claim rule was needed and encouraged the Commission to preserve the multibillion-dollar direct selling industry.

“The FTC has provided clear guidance relating to earnings claims. The 2018 Business Guidance Concerning Multi-Level Marketing, for example, offered specific direction about statements made by direct sellers and has been important as direct sellers ensure the accuracy of representations about the business made to current and prospective participants. If a new rule is proposed, we respectfully urge that it is consistent with earlier direction,” said the letter, signed by DSA President Joe Mariano.

The Association tells SSN that it is currently advising its members on the ANPR and request for public comment and that it has launched a task force to further strategize on future communications with the Commission.

“We are and will continue to be engaged on this rulemaking in close consultation with our members,” says Brian Bennett, senior vice president, government affairs & policy. “We have launched a task force that is crafting our response and strategy. This is an important issue, which will continue being top of mind for the industry and Association.”

The FTC invites members of the public to comment on any issues or concerns they believe are relevant to its consideration of an earnings claims rule, including factual data to back up their comments.

Below is an abridged list of the FTC’s questions that are designed to assist anyone wishing to comment. The Commission states that the questions are not meant to limit the issues on which public comment may be submitted.

What successful strategies are you seeing your field implement this year?