The results are clear—a record-breaking year and an unequivocal demonstration that direct selling is dedicated to serving America.

The Direct Selling Association (DSA) released its Growth and Outlook Survey results for 2020 showing a record level of growth for the channel in one of the most economically challenging years in U.S. history.

Despite the onset of the COVID-19 pandemic in March 2020 and the subsequent shutdowns that ended the longest period of U.S. economic expansion on record, the DSA reported channel growth of 13.9 percent over the previous year, reaching a record $40.1 billion in 2020 retail sales. This is quadruple the growth of U.S. retail sales overall, which the U.S. Department of Commerce reported was 3.4 percent for 2020.

DSA President Joseph N. Mariano credits the adaptability and innovation of direct selling companies for the channel’s success during the worldwide economic downturn.

“The direct selling companies adapted quickly to a world with changing needs by empowering their independent sellers with the tools to serve their customers and fellow sellers—innovative technology, updated health and safety policies, and second-to-none business support. During this time of uncertainty, Direct Selling Association and its members also worked to ensure that customers and salespeople alike can rely upon the highest level of business ethics. The results are clear—a record-breaking year and an unequivocal demonstration that direct selling is dedicated to serving America,” Mariano said.

Not only did direct sellers see a record in total sales in 2020 at $40.1 billion, but the 13.9 percent year-over-year growth reported for 2020 was far and away the biggest jump in growth the industry has experienced in a decade, and the first record-breaking year for direct retail sales since 2015. While direct sellers saw their total sales grow by 26 percent from 2010 to 2015, the period between 2015 and 2019 saw sales in the channel drop by 2.5 percent. 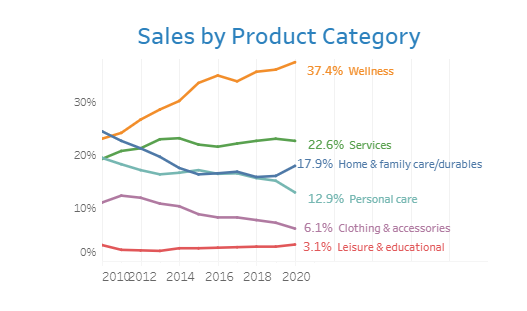 The 2020 survey also provided insight into the performance of six segment and product groups within direct selling.

For the 10th year in a row, the Wellness segment recorded the highest sales among direct sellers, accounting for 37.4 percent of the channel’s total retail sales in 2020.

This is perhaps not surprising, as the increase in consumer interest in and prioritization of wellness has been well documented over the past few years.

McKinsey & Co., a global consulting firm, released a survey this year of 7,500 consumers in six countries showing 79 percent of respondents report that wellness is important, and 42 percent consider it a top priority.

The firm estimates that the global wellness market stands at $1.5 trillion, with expected annual growth at 5 percent to 10 percent.

The service segment, with 22.6 percent of the total sales, represented the second-best performing group.

Over the past five years, the Home & Family Care/Durables segment has reported sales totals on track with the Personal Care segment. However, in 2020, Home & Family Care businesses jumped to 17.9 percent of total channel sales, while the Personal Care segment represented a 12.9 percent share of the total. Clothing & Accessory direct sellers finished 2020 with 6.1 percent of channel sales while Leisure & Educational sellers again represented the lowest-performing segment at 3.1 percent.

Adding to the positive results for 2020 are the survey’s findings that the past year saw a 13.2 percent increase over 2019 in the number of people selling products within the channel.

The DSA reports that 7.7 million people participated as direct sellers in 2020. Eighty-eight percent of these sellers worked part-time (fewer than 30 hours/week), and 12 percent were counted as full-time sellers (30 hours or more per week). The DSA defines sellers as people who sell products and/or services to consumers and may sponsor people to join their team.

The DSA differentiates between these two types of product purchasers as follows:

Discount Buyers – They are eligible to purchase, sell and sponsor, but are product lovers only
purchasing products or services they personally enjoy and use at a discount.

It is important to note that the 41.6 million figure does not include all of the customers in the channel, rather, only those who have signed an agreement with a direct selling company.

Brian Palmer, CEO of Theorum Method, says that the channel should be proud of its growth, but should expect a softening of numbers as America’s need for gig work decreases with the improving economy and end of lockdowns.

“I think it’s unrealistic to expect the entire industry to maintain 2020 growth numbers,” Palmer says. “Anyone can see record growth that occurred in 2020 was in an abnormal time around the pandemic. Logic tells us there’s going to be a pullback.

“We’re a contrarian industry. When the economy does worse, we tend to do better.
The channel will continue to remain strong, but it’s not going to sustain super growth.”

The Growth and Outlook Survey presented 2020 demographic data that included both direct sellers and discount buyers. The survey reported a gender breakdown of 75 percent women and 25 percent men, a statistic that has remained consistent over past years.

The racial and ethnic breakdown contained in the survey showed that 87 percent of direct sellers and discount buyers are white/Caucasian, 8 percent are Black or African American, 3 percent are Asian, and 1 percent is Native Hawaiian/Pacific Islander, leaving 2 percent as “other.” The DSA notes that 22 percent of participants are of Hispanic ethnicity (The DSA reports Hispanic Ethnicity and Race separately).

Ben Gamse, director of industry insights at the DSA, reflects on the factors behind this year’s exceedingly positive survey results.

“During a time when brick and mortar was largely shuttered and Americans were looking for entrepreneurial/supplemental earning opportunities, direct selling continued to be aligned with the trends mentioned above, and it’s not surprising that direct selling performed well in the U.S. in 2020.”

Gamse points to the direct selling channel’s willingness to pivot to e-commerce as a key to growth in such a turbulent year.

“Another important factor is the digital transformation many have undergone in the past year. DSA’s 2021 Digital Transformation Study indicates the majority of direct selling companies invested significant resources to transform their companies virtually including: e-commerce/mobile commerce, virtual events and faster payments. Although, overall, U.S. retail sales only grew 3.4 percent in 2020, e-commmerce grew by 31.8 pecent, and direct selling was likely able to ride on some of those e-commerce tailwinds. All indications point to continued direct selling growth in 2021 YTD,” Gamse concludes.

The DSA’s Growth and Outlook survey was conducted by Nathan Associates, a private international economic and analytics consulting firm that has worked with the DSA since 1995.

What pandemic-related changes did your company make that...

What suggestion from the field have you implemented...